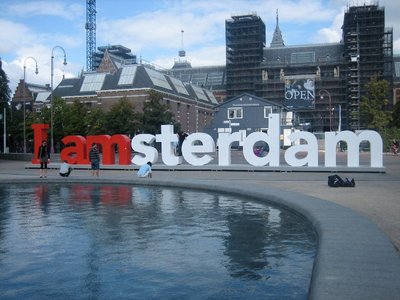 Amsterdam, or the city where a lot of French people just go for a smoke.....

But , it's actually more than that,it's such a nice city ,really safe where people are really friendly and helpful.

I went the first time in December 2009 before going to Paris, it was a real crush for me that's why I came back one year later.

I can remember everything, the train to go to the city, my first coffee shop, the crazy souvenir shops, the street .. by the way my first hotel was Hotel Allure on Sarphatistraat.

I could take the tram and go straight to the city center in 10 min, you can eat at Burger King which was my first time, we don't have any in France.

At this period of the year, it was snowing and people are able to be at 2 or 3 on the same bike, if you don't push yourself they gonna ring the bike bell and will not try to avoid you lol.

I was surprised to find lot of product with cannabis on it in souvenir shops(t-shirt,mug,cap,underwear, even drinks!)

It was a funny atmosphere, in coffee shop I can remember that you have a menu on the counter where you can see which weed or hash you can buy, gram or pre-rolled with the price just next to it.

It's rare that you can drink alcohol and smoke in the same area, I saw also some shisha place and coffee where they propose THC balloon.

Amsterdam has lot of museums ;I've been to the canabis museum,where basiquelly, you can see everything about it;history of canabis,pictures,how have a good plant and you can see the real plants under lights.

You can also go to Anne Franck museum,Van Gogh, Tussauds and even drink a bier in Heineken industry....

I almost forget the RED LIGHT DISTRICT, the District where you can see prostitutes behind a screen, something for sure which not exist anywhere else.

Just walking on the street in Amsterdam it's a pleasure, people are really open minded,smiling, if you get lost they gonna help you straight away,it's a city where you can see things impossible anywhere else !

One of the first cities that I visited and still in my heart.

Hopefully I will go back soon and enjoy the nightclub ( thing that i haven't done yet !! ) ^^